My father is of the Mjoli clan, house of Sondzaba. His name was S’hlabane, his father was Mandiza. We are the descendant of amaWushe who joined forces with amaZelemu against the domination of king Shaka who wanted to expand the Zulu kingdom by taking independant nations like amaWushe, amaQwabe, etc under him as Zulus. Others have argued that Wushe is related to Zulus by the virture of Zulu giving birth to two sons, Wushe and Didi (Zelemu).

However, this is a late encounter when amaWushe had already lost their autonomy after amaZelemu took charge. Nonetheless, Lufulwenja founded the surname Mjoli. His sons inherited it and passed it on. He was given birth by Mageba kaGumede kaZulu. Khalimeshe is a grandson of Didi, he was the one who gave birth to Madzikane. King Madzikane is important for amaBhaca. He is the one who fled for safety with his people during the wars of Umfecane during the late 1800s.

My Mother is of the Dlamini royalty, they are the children of Mazinywana, ka Sibal’khulu. I am also a grandchild to umzi wakwa Jali and Ndzimande. You see we were kings and queens back then before Mfecane, but today the soil has seen better days.

“Historically, around 1720’s, we the Bhacas lived in the Northern part of the Pongola River near the Lebombo Hills, in a place that is today the boundary between Mpumalanga and Swaziland. As it is often stated that at about this period, the KwaZulu Natal was occupied by different tribes such as abaMbo and the aMalala, it is suspected that the amaBhaca came from one of these tribes. During this period amaBhaca were Zelemus.

The movement of the Bhacas is estimated to have been visible between 1734 and 1820’s.

Between 1734 and 1800’s the amaZelemu left the land below the Drakensberg Mountains towards the east at times would hide in the forests like Nkandla forest so that they would not be seen. It is suspected that when the amaZelemu fled, they were accompanied by the amaWushe. Some chief that lived along amaBhaca include Chief Nondzaba, Dlepu, Mnginambi and Macingwane.

These tribes lived together without clash amongst each other. The clash started (BIG-Clash) with the then Zulu King Shaka during the Mfecane wars. It was the day King Tshaka sent his troops to attack the amaZelemu tribe. It is believed that in 1820 Madzikane had an argument with Tshaka because the amaZelemu tribe was unified, strong and frightening and that Tshaka did not like this. He thought that this tribe was trying to imitate him. Tshaka, his councillors and his traditional healers therefore plotted to kill Madzikane.

When the battle broke out, tribes spread out and lost some of their members. Some members of amaWushe collected some of their members, however others joined under Madzikane, son of inkosi uKhalimeshe. Madzikane fled in an eastern direction, following the exact same route as the Amachunu tribe that had also moved because of this unrest. He crossed the UMkhomazi River. Other tribes, aMacingwane under chief Cekwane, amaVundla, amaNtunzela and amaWushe Nondzaba in 1821. It is believed that amaVundla and amaNtunzela tribes were attacked and forcefully removed and their livestock taken by amaWushe under inkosi Nondzaba.

Inkosi uMadzikane had decided to stay between Rhode and the uMganu mountains in the Mount Free district. It is here where he built his great place. In August 1830 Tshaka again attempted to attack Madzikane. Inkosi Madzikane, was warned that Tshaka was planning to attack. In preparation for another battle, the children and the live stock were taken into hiding at Umganu and Luyengweni, while the amaBhaca troops were training, waiting to fight when attacked. When the Zulu troops arrived, mighty of inkosi Madzikane defeated them. They were overcome by the cold and many of them were frozen. The Madzikane troops attacked the Zulu troops and the Zulu troops retreated back home. Since that day, the now called Ntsizwa Mountains were named after the death and the killing of the iintsizwa zikaTshaka. The death of the Zulu troops was seen as Madzikane’s magic. It is believed that as he was strong on muthi, and also a traditional healer, Madzikane used his muthi. This also follows his statement as often quoted after he had received the rumours that he was going to be attacked by the Zulu troops, “Umkhosi wakaZulu mina ngowushaya ngesandla esisodwa” (meaning, “I will beat the Zulu army single handedly”). Although there are different stories on the actual performance of Madzikane’s muthis, there is a story that says Madzikane made a big fire and the smoke that came from that fire turned into clouds that produced frost.

Madzikane proceeded with his mission to expand the Bhaca Nation. However, four years later he died. It is suspected that he was killed by the Thembu army at the forest of Gqutyini as he had attacked and attempted to take the cattle of abaThembu.

Madzikane’s son from his first wife, Mdutyane, was still young. INkosi Ncapayi from the right hand house had to rule. The Bhaca nation became strong under the rule of Ncaphayi. In 1835 the amaBhaca built a strong relationship with Inkosi Faku of the Pondoland. AmaBhaca temporarily migrated to Pondoland under the arrangement with iNkosi uFaku. However this relationship did not last long. AmaMpondo quarrelled with amaBhaca. It is suspected that the quarrel had something to do with the number of cows for lobola payment. The story goes on to say that a Bhaca young man was killed when he went to fetch his cattle that he was paid for lobola. On the other hand, it is said that Ncaphayi did not want to combine his army with that of amaMpondo. These troops met at a battle in the land of Lusikisiki. Other Bhacas under Mdutyane fled to Mzimkhulu. It is believed that Ncaphayi tried to attack Faku in 1844. Unfortunately Ncaphayi was killed at an area called Nowalala in Pondoland.

As Mdutyana followers stayed at Mzimkhulu, Ncaphayi’s first son Diko had to take over and rule. Later on the son from the second wife and the younger brother, Makaula took over and ruled. Diko is the Chief of ELundzini Royal Kraal at Lubhacweni in Mount Frere. The district of Mount Frere is built on the land under iNkosi Diko. Makaula is also one of the Chiefs at Elugangeni area under Mount Frere District as well. ”

Ndlovu in Venda they say Ndou. is Sotho, Tlou. Shona-Zhou. You also find it in Swahili, in east an west Africa. So all these are Ndlovu yakwaMthombeni tribe which falls under kalanga tribe within the Ndebele nation.

Ndebele is a nation made up of various tribes that were incoporated by by King Mzilikazi. INdlovu yakwaGatsheni is part of that tribe. So through Mfecane various tribes lefr Zululand and headed for central Africa. Some settled in Malawi, Zambia, Mozambique, Mthwakazi etc.

All these tribes carried elements of the original Ndlovu but due to circumstances changed their surnames to suit local conditions, eg Ndou (indlovu in Venda).

Ndlovu in Venda they say Ndou. is Sotho, Tlou. Shona-Zhou. You also find it in Swahili, in east an west Africa. So all these are Ndlovu yakwaMthombeni tribe which falls under kalanga tribe within the Ndebele nation. Ndebele is a nation made up of various tribes that were incoporated by by King Mzilikazi. INdlovu yakwaGatsheni is part of that tribe.

So through Mfecane various tribes lefr Zululand and headed for central Africa. Some settled in Malawi, Zambia, Mozambique, Mthwakazi etc. All these tribes carried elements of the original Ndlovu but due to circumstances changed their surnames to suit local conditions, eg Ndou (indlovu in Venda).

There are 3,000 census records available for the last name Mthimunye. Like a window into their day-to-day life, Mthimunye census records can tell you where and how your ancestors worked, their level of education, veteran status, and more.

There are 642 immigration records available for the last name Mthimunye. Passenger lists are your ticket to knowing when your ancestors arrived in the USA, and how they made the journey – from the ship name to ports of arrival and departure.

There are 1,000 military records available for the last name Mthimunye. For the veterans among your Mthimunye ancestors, military collections provide insights into where and when they served, and even physical descriptions. 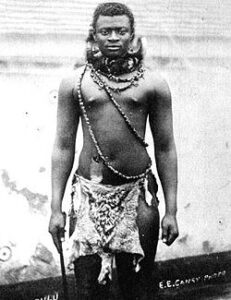 Dinuzulu kaCetshwayo was the king of the Zulu nation from 20 May 1884 until his death in 1913. He succeeded his father Cetshwayo.